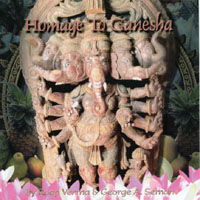 Roop Verma and George A. Seman

There is much interest in the use of music in hospice care. Two musical forms are commonly discussed in hospice work: harp and chant. But there's more to chant than just the Gregorian form, as this delightful Hindu example proves. This audio CD features soft, relaxing, rhythmic chanting in honor of the much-loved Hindu god Ganesha, accompanied by delightfully soft sitar and other instrumental music. The melody is calming and soothing, suitable for meditation or relaxation purposes. The CD has two long tracks, one entirely in Sanskrit, and the other in Sanskrit with English translation. We are providing the English version as a sample with permission of the composers. The English version is useful in order to understand the meaning of the lyrical chant, which also appears in print form with the CD insert. For a purely auditory experience, try the Sanskrit version, which communicates a spirit of love, serenity, and affection even if you don't understand the language.

The repetitive chanting of the name of God is a hallmark of many religious traditions. In Sanskrit this repetition is called japa, and it is a basic spritual practice for many Hindus. The lyrics of this CD include both japa and a simple but moving spiritual poem composed by George A. Seman. Both tracks have the same music, primarily sitar but with incidental use of conch, tambura, harmonium, synthesized guitar, and other tonalities. Very light percussive tabla and cymbals are never intrusive. Both tracks conclude with a remarkable transition from the sacred sound "Aum" to simple breathing sounds, a profound reminder that our real seat of power and connection with the Divine resides within. The breath sounds at the end of the tracks may have a strong emotional effect for anyone who has sat vigil at the bedside of someone who is very sick.

There's an interesting background story to the CD itself. It's a collaborative musical work by two devotees of Ganesha, Roop Verma and George A. Seman. The Sanskrit chorus and English lyrics were received through inspiration by George A. Seman, who utilized Sanskrit scholars to polish the final version. World-class sitarist and composer, Roop Verma, translated the lyrics into a healing, meditative, musical piece. The angelic voice of Lorna DiMeo, also a devotee of Ganesha, adds a charming accent. It's clearly a work of love by all concerned. George A. Seman worked as a psychologist for twenty years in the human service field and now devotes all his efforts to creating musical compositions. His life experiences have led him to combine psychological and spiritual techniques with the composition and performance of musical works. Lorna DiMeo is a healer and psychotherapist who has incorporated singing into her therapeutic work. Lorna sees her voice as a healing instrument that speaks directly to the soul.